Readers have asked me about the real people who appear in 1917. Here are just a few of them – some faces from the Home Front.

Vida Goldstein (1869-1949). Vida’s life as an activist began in 1890 when she helped her mother collect signatures for the Woman Suffrage Petition, and over the next decade she became deeply involved in a range of political and benevolent groups, especially focused on the fight for women’s right to vote.

After some women were granted the vote in federal elections in 1902, she was one of four women who were the first in the British Empire to stand for election to a national parliament – as a candidate for the Senate in 1903. To agitate for the vote in the states, she formed the Women’s Political Association (WPA) and ran a newspaper, the Woman’s Sphere. In 1908 Victoria granted (some) women the vote, and after that victory, Vida made four more attempts to gain election to Federal Parliament: in 1910 and 1917 for the Senate and in 1913 and 1914 for the House of Representatives, always as an independent, and ran The Woman Voter newspaper.

When the Great War began,  she focused her energy on campaigning for peace and later against conscription, and working on a range of issues that affected women and children.  She formed the Women’s Peace Army in 1915,  a women’s unemployment bureau in 1915-16 and the Women’s Rural Industries, which ran the Mordialloc Women’s Farm. In 1919, with Cecilia John, she attended the Women’s Peace Conference in Zurich. After the war, Vida continued to argue for disarmament and peace, as well as birth control and other measures towards equality.

The federal electorate of Goldstein is named in her honour.

Cecilia John (1877-1955) was a feminist, agriculturalist, music  and dance teacher and opera singer. As a young woman, she built and ran a poultry farm at Deepdene, to pay for her musical training, and later helped run the Women’s Farm with her friend Ina Higgins. She was an acclaimed performer on the Melbourne stage, but once war broke out she devoted her energy to the Women’s Peace Army, and later on to the Children’s Peace Army.

One of Vida Goldstein’s closest friends, she managed The Woman Voter and they travelled together around the country and overseas to promote peace and women’s activism. She sang the anti-war song, ‘I Didn’t Raise My Son to be a Soldier’ so often at public demonstrations and meetings that the song was banned, and she was also once charged under censorship laws for ordering banned anti-conscription leaflets. After the war and her visit to Geneva in 1919 with Vida, she became involved with the Save the Children Fund and the fight against poverty. 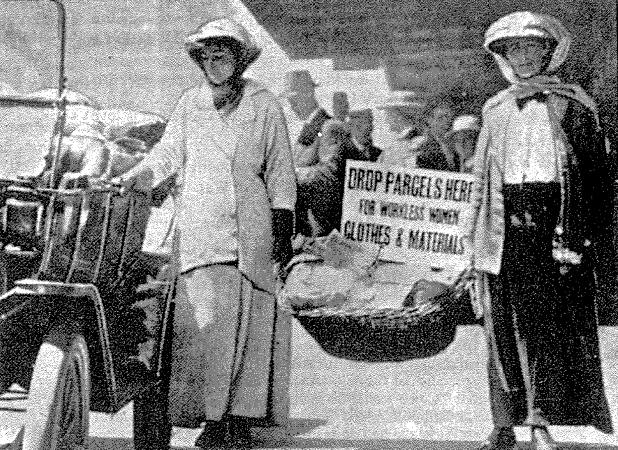 Adela Pankhurst (1885-1961) was the youngest of the famous Pankhurst family of suffragettes, all of whom campaigned for the vote in Britain before the war. Once war broke out, the family split – Mrs Pankhurst and her daughter Christabel wholeheartedly supported the war, while sisters Sylvia and Adela did not. Adela was packed off, alone, to Melbourne with only £20  to her name, and quickly joined Vida Goldstein and the WPA in their campaign against the war. She was a brilliant public speaker and became a committed socialist. In 1917 she spent some time in prison for speaking at banned rallies and refusing to stay silent about food shortages.

I wasn’t able to include all the complexity of Adela’s year in the novel, but by the end of 1917 she had married unionist Tom Walsh, spent several months in prison, and split with the WPA to join the socialists – although she continued to speak at WPA rallies against conscription.

In later years, Adela and Tom were founding members of the Australian Communist Party but later moved to the right, with Adela even being briefly interned in 1942 for her friendship towards Japan.

And last, but most certainly not least…

My gorgeous great aunts Connie and Madge, who indirectly inspired the character of Maggie.

Eight year-old Madge led the United Women’s No Conscription Procession in 1916. Bless her.

I’ll write more about my family’s connection to these stories one day soon.

Next episode: some of the real pilots and soldiers featured in 1917. Stay tuned.

In honour of International Women’s Day and Women’s History Month, here are just a few of my favourite novels by and about women, all illuminating the lives of women in the past and today. 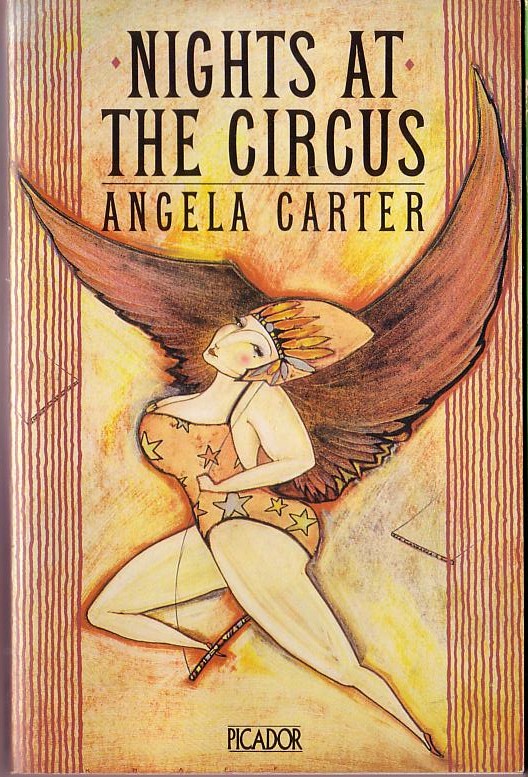 Nights at the Circus, Angela Carter
A thrilling trapeze act of character, voice and magic.
Beloved, Toni Morrison
Unflinching. Utterly captivating. A writing masterclass in one small but enormous book.
The Passion, Jeanette Winterson
One of the great postmodern historical novels, The Passion is a lesson in using voice to connect past and present, and in combining heartbreak with restraint.
Fingersmith, Sarah Waters
I’ve said this before, I know: this is virtuosic ventriloquism and storytelling, with a twist that will have you throwing the book across the room and then scrambling to pick it up again to find out what happens next.
The Colour Purple, Alice Walker
It never gets old. Never.
Alias Grace, Margaret Atwood
Chilling. Brilliant.
Possession, A. S. Byatt
Another neo-Victorian ventriloquist’s performance, capturing all the melodrama of a Dickens novel.
Orlando, Virginia Woolf
I wish there was another word for seminal. How about: the book that gave birth to us all? (Here’s Tilda Swinton’s take on it.) 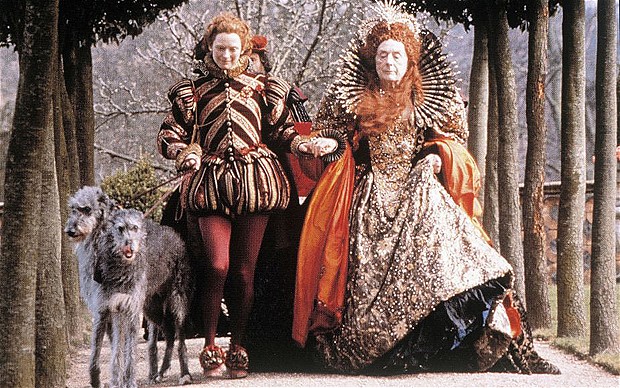 Tilda Swinton as Orlando and Quentin Crisp as Elizabeth (and two excellent hounds) in Sally Potter’s adaptation of Orlando.

And some more recent titles:
Skin, Ilke Tampke
Beautifully written and reimagined world of early Britain during the confrontation with Rome.
Theodora, Stella Duffy
The appropriately riotous tale of the acrobat who became Empress of half the known world.
Code Name Verity, Elizabeth Wein
It’s brutal and stunning and unforgettable.
Hild, Nicola Griffith
Another miraculous reimagining of Britain – this time in the early decades of the Christian missionaries and saints.

I could go on and on but I won’t. Feel free to add your own suggestions.

It’s spring here in Melbourne. Sunday. I ought to be gardening or, given that I’m a Melburnian, out to brunch, but instead I’m crazy busy.

Yesterday I went to a briefing about the Dinosaur Dreaming project at Melbourne Museum. I’ve volunteered to go on a dig along the “Dinosaur coast” in February. Next weekend, they teach us to break rocks. You have to take your own chisel and magnifying lens thingummy. I can’t tell you how thrilling that is.

Then I spent the afternoon on a panel at the Professional Historians Association’s social media masterclass, full of excited historians embracing Twitter and Facebook, Pinterest and Periscope.

The ebook I co-edited earlier this year has just come out: academic papers from the fourth global Gender and Love conference in Oxford. It’s called Past and Present: Perspectives on gender and love.

Earlier in the week I gave a paper to colleagues in my department at La Trobe University – my initial thoughts on something which just keeps getting bigger and more complex, about the idea of the “strong female character” in young adult fiction, where it comes from and what impact it has.  See? There’s another book project right there. As if I haven’t got enough to do. But it’s so fascinating. Early days. I don’t even really know what questions I’m investigating yet.

And I’m loving the idea that Goddess is now out in the US and Julie is becoming famous all over again, in places she couldn’t even imagine.

I’ve had a few questions from readers coming through, so I’ve just published some FAQs about the book and Julie. If you think of any more, drop me a comment below.

There’s been nary a day in the past decade that I haven’t had to set someone straight about the fact that I wrote my books for people, not women. My female colleagues report much of the same. We swap stories and shake our heads and laugh, but it isn’t funny. Because when an artist has to assert that her intended audience is all humans rather than those who happen to be of her particular gender or race, what she’s actually having to assert is the breadth and depth of her own humanity.

– Cheryl Strayed, on gender bias in fiction, in the New York Times.