Tragédie is a novel based on the life of Julie de Maupin, a woman whose story is too remarkable to be true – and yet it is. Mostly.

She was one of the world’s greatest swordswomen, and also a star of the Paris Opera; a cross-dresser and occasional nun; and a lover of famous and infamous men and women. She has been portrayed in literature and on screen as everything from an Amazon to a fiend to a symbol of Romanticism – although that most famous portrayal, by Gautier in 1835 (1951), has very little to do with the real woman.

My project is to create a novel based on her life, in a new version of her voice. The accompanying exegesis focuses on the idea of an “authentic” historical voice in fiction, and whether that is definable, possible or desirable. I plan to do that through examining the different ways in which we hear La Maupin’s voice in portrayals of her, including my own, with reference to the ways in which other writers of historical fiction have attempted to convey authenticity in voice – or not, as the case may be.

There are many varied accounts of her life, from contemporary anecdotes to a TV mini-series: some clear and some disputed facts, many interpretations of her character and actions, embroideries and embellishments – some of which may come from her – and long passages in her short life of which little is known. One of my tasks is sorting fact from fiction and then turning it into a completely different fictional life and voice. 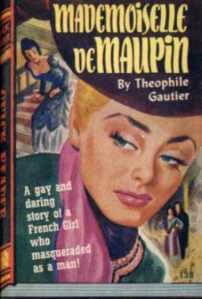 The life
Born in Paris around 1670, Julie was the daughter of the secretary to Louis XIV’s Master of Horse, Count D’Armagnac. Her father was an accomplished swordsman and trained the court pages, probably at Versailles, and so educated his only child alongside the boys. She dressed as a boy from an early age and quickly surpassed the pages in her skill with the sword.

By the age of 14 she had become D’Armagnac’s mistress and he found her a husband, the timid sieur de Maupin, who was promptly dispatched to the provinces to a stimulating job in tax collection. Some accounts claim he was sent off the morning after the wedding.

But she quickly tired of D’Armagnac and ran off with a fencing master called Serannes, with whom she found herself down on her luck, for the first of many times, in Marseilles. They earned what they could from giving fencing demonstrations at fairs and in taverns – at one, a man refused to believe she was really a woman, because she was simply too good. She took off her blouse and the crowd fell silent.

She began her singing career with the Marseilles Opera, and her early appearances on stage were greatly admired, particularly by one young woman with whom she fell in love. The girl’s family quickly packed the poor thing off to a convent. De Maupin followed, entering as a novice. One night after an elderly nun died, the pair stole the body, placed it in the girl’s cell and set fire to the convent, and escaped. They were on the run for three months, and in their absence, de Maupin was sentenced to death by the court in Provence under the name sieur de Maupin as the judge couldn’t quite admit the possibility of a woman abducting a nun.

The girl was returned to her family eventually, and de Maupin continued her escapades around the countryside, now back in men’s clothes. One day she literally bumped into a young nobleman called D’Albert who challenged her to a duel, not realising she was female. She beat him, wounded him, nursed him back to health, and in some accounts he is the love of her life. At the very least they were lifelong friends.

She took singing lessons and paired up with a new lover, Thévenard, who also fancied himself as a singer. Together they returned to Paris and on their first day there, while de Maupin was visiting her old lover D’Armagnac to convince him to arrange a pardon for her little indiscretion in Provence, Thévenard auditioned for the Opera, and was hired immediately. His condition was that de Maupin also be allowed to audition and the Opera reluctantly agreed, so by the age of 17 she found herself a member of one of the world’s greatest musical companies.

She was pardoned by Louis, and went on to become a star, appearing in all of the Opera’s major productions from 1690 to 1694. She became La Maupin.

Her career in Paris was interrupted after she attended a court ball in men’s clothes and kissed a young woman on the dance floor, for which insult she was challenged to a duel by three different noblemen. She told each of them she would meet him outside, fought them all at once, and beat them all. But given that Louis had outlawed duels, she had to flee to Brussels, where she became the lover of the Elector of Bavaria. He found her a bit too much to handle after she stabbed herself on stage with a real dagger, and offered her 40,000 francs to leave him alone. She threw the coins at the feet of his emissary and stomped off to Madrid in a huff.

She found herself working as a ladies’ maid to a Countess Marino whom she resented so much that one night before a grand ball she dressed the Countess’s hair with radishes so that everyone but the Countess could see them. Needless to say she was on the road back to Paris before the Countess arrived home.

She was pardoned for her duels, this time through the intervention of the Dauphin, and returned to the stage. She performed for the court at Trianon, appeared once again in every major Opera production, and introduced the Italian idea of the contralto voice to France. She defended chorus girls against lecherous barons and pompous tenors, fell in love with a soprano, tried to kill herself, threatened to blow the Duchess of Luxembourg’s brains out and ended up in court again for attacking her landlord. She and Thévenard remained best of friends until her retirement, although they also had some infamous spats, and one evening on stage she bit his ear so hard he bled.

Through many heroic and sometimes pathetic adventures, the crowds adored her in spite of her high-profile affairs with women, her brawling and duelling, her breeches and swords and even her contralto.

In 1703 she fell in love with Madame la Marquise de Florensac, the “most beautiful woman in France” (Saint-Simon 1897) – so beautiful that she too had had to flee to Brussels for several years because the king’s brother was obsessed with her. She was also one of the most famous, wealthy and well-connected women in France. The two women lived, according to a contemporary diarist, in perfect harmony for two years until de Florensac died of a fever.

Distraught, La Maupin entered a convent where she died at the age of 33, in the words of one biographer, “destroyed by an inclination to do evil in the sight of her God and a fixed intention not to”, after which, he claims, “her body was cast upon the rubbish heap” (Gilbert 1932).

The first draft of the novel is episodic at present, tracing key moments in her life. It is structured in the same way as one of the lyric tragedies in which she appeared, with a prologue and five acts, each of which is divided into a monologue or recitative, followed by scenes or dances involving a number of cast members and sometimes a full chorus and ballet corps.

The main narrative or recitative is in La Maupin’s voice, in first person, as she lies on her death bed in the convent speaking to and often roundly abusing the poor young priest who has been sent to take her confession. Most of her roles on stage were recitatives – she would be the goddess or mythical figure who arrived in the middle of a storm and issued warnings or prophecies from above.

The dramatic scenes and dances switch into third person. I’m experimenting with these and with dialogue styles at present.

My version of her voice is transparently modern, for many reasons but most critically because she was a radically modern figure in her own time and would be if she appeared today – she is Lady Gaga.

There are documented fragments of her voice but I have yet to find any primary sources or anything resembling the real thing, except one hilarious letter to Thevenard written during one of their tiffs. Much of my time at present is spent trawling through digitised archives on the other side of the world to find and compare the diverse accounts of her life.

She seems to have the effect of polarising her biographers and interpreters throughout the centuries, but particularly towards the end of the 19th century. Interestingly, many later accounts make no mention of de Florensac, which is remarkable given her fame.

Earlier accounts seem to have been more accepting of La Maupin as she was. This is one contemporary’s account of her affair with de Florensac:

“… for two years, they lived on this tenderness they thought ideal, ethereal, and beyond the reach of the stain of men; the young women isolated themselves, enamoured, only appearing in public at occasions where their presence was essential. Indeed one finds, after 1702, no songs or satire against the two women.” (Saint-Simon 1897)

On the other hand a few later biographers claim La Maupin reconciled with her husband, “seized with a fit of devotion” (Kippis 1790), and died in peace and piety at home.
“Finding herself no longer an idol,” writes another, “a fit of penitence for a life misspent seized the poor siren, who regretted the dissipation of past years, and bewailed the errors of her youth.” (Clayton 1864)
So not surprisingly, the way in which her voice is conveyed and the portrayal of her adventures depend a great deal on the view of the authors as to whether they see La Maupin as a transgressive monster, a swashbuckling heroine, a victim, a flapper, or a feminist prototype. One describes her as “the Lola Montez of her day, but with more beauty, more talent, more power, and more daring” (Dwight 1860); another calls her a “misguided being” (Clayton 1864); while yet another describes her as “beautiful, valiant, generous and superbly unchaste” (Rogers 1928). 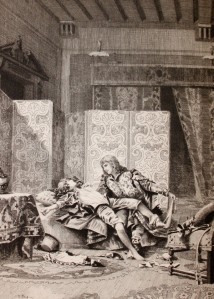 It seems to me, so far, that after the publication of Gautier’s Mademoiselle de Maupin in 1835 and The Three Musketeers in 1844 she becomes more like a Fifth Musketeer. When it comes to her voice, many generalist biographers after that date have her speaking like a stage villain: “You are a coward and a craven. It was I who defeated you!” (Gilbert 1932).

In my version she’s more likely to say something like: “Shut up, you prick!” at the time, and then later recount it to her long-suffering confessor as a heroic speech worthy of one of her characters on stage.

This is emblematic of the broader questions I’m investigating around authenticity in historical portrayals and narrative voice. My argument is basically that authenticity is not possible, and even if it were, it would be largely unpalatable to the modern reader. If that’s the case, then what techniques remain for the fiction writer to accurately reference historical voices?

It is the issues and tensions inherent in those portrayals of La Maupin, and in my own attempts to create an anti-authentic voice, which form the basis for the exegesis as well as the novel.

This is a summary of my PhD (Creative Writing) project, from a paper given last week to a faculty seminar.

One thought on “Tragédie”