Among the many decisions we make when writing for young readers are creative and ethical decisions about violence and grief.

I’ve always been very conscious of how to treat scenes like swordfights or battles in fiction for young readers. It’s not that I shy away from the reality of violence – quite the opposite. I feel like I have a responsibility to think about how to present it honestly, and not just as a big, mindless adventure (not that there’s anything wrong with that, it’s just a different type of book).

So say a kid had their first swordfight. Say they were just a little bit older than the reader – twelve or thirteen, maybe, facing off against a grown man. It’s all very exciting, and I make sure it’s an action scene with plenty of – ahem – punch. But then I wonder, if that was you, and you’d just actually stabbed someone, wounded someone, drawn blood for the first time in your life, how would you feel? Say you’d been chased by a baddie all over the Mediterranean, and finally came up against him in a duel on the clifftops and he ended up dead. How would you feel? Even if you were a pirate?

I made certain decisions about how to present fighting and battles in the Swashbuckler series, then how to present torture and loss in Act of Faith and The Sultan’s Eyes. (That makes them all sound terribly grim. I promise they’re not.)

But writing about war, in particular writing about the First World War, in 1917 presented a different set of challenges. How do you explain shell-shock to a reader aged ten? How do you present the war in the air without glorifying the aces and ignoring their casualties? Which of your characters will survive? (It’s the Western Front. They can’t all make it through unscathed.) How do you convey the intense grief of those whose best mates or loved ones were killed or wounded or missing?

How do you do all that without it becoming unbearable for the reader? 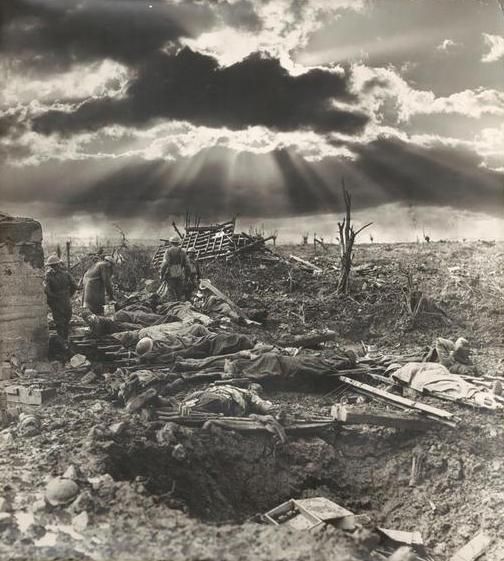 Frank Hurley’s famous photo of the morning after the first battle of Passchendaele, 1917 (Source: ABC/NLA)

The life expectancy of a pilot on the Western Front in 1917 was just a couple of weeks. They lived in a state of heightened tension and with impending doom, as did the men in the trenches. They could never explain it to the people at home. Their letters home are often totally different to their diary entries, or the oral histories recorded years later. On the other hand, the newspapers were filled with stories about dashing flying aces and their kills, as if each kill was just a number, not a human being.

How do you write a war?

Well, I hope I’ve managed to balance the needs of the reader with the pleading voices of the past.

4 thoughts on “Writing the war”