A few people have asked me about the aircraft Alex and Charlie fly in 1917.

Here’s an RE8, nick-named the Harry Tate after a music hall star. This one is a plane from 3 Squadron, Australian Flying Corps –  the real unit to which my fictional characters belong.

3 Squadron RE8 on the Western Front

The RE stands for Reconnaissance Experimental, and this was the eighth model in the line. It was pretty revolutionary, as the first British two-seater aircraft with the observer (or gunner – in 1917 that’s Charlie) in the rear cockpit, with a clear view of the sky. The observer defended the plane while the pilot (Alex) in front flew, navigated, took the aerial photographs, and if necessary used the Vickers machine-gun. The Vickers was synchronised to avoid hitting the propeller blades. (That might sound obvious, but the technology didn’t exist at the start of the war.) The RE8 had a 150–horsepower engine and a maximum speed of 102 miles per hour. It could stay in the air for over four hours  – significantly longer than many other planes of the time.

You might think that taking a few snapshots would be easy. Here’s the kind of camera they used.

Aerial camera operated by the pilot.

And here’s what the trenches looked like from the air. (I’ll write more about that soon.)

Each squadron had a ground crew of skilled mechanics, armourers (like Len in 1917), riggers and other craftsmen to keep the planes flying. They worked around the clock under pretty harsh conditions – while the airfields were set back from the trenches, they were still shelled and bombed and freezing in winter. 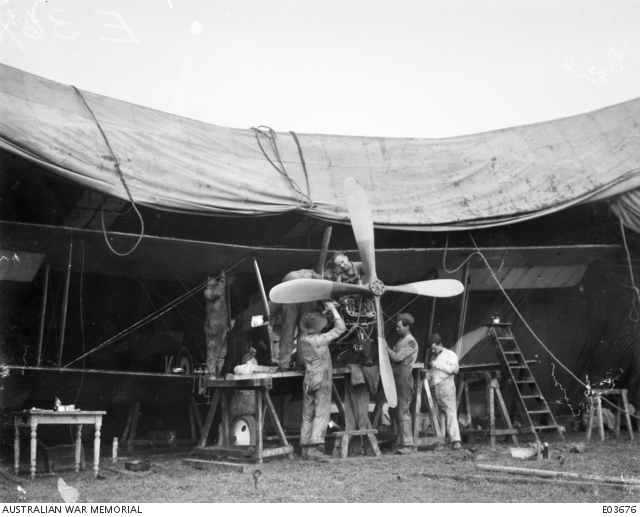 Mechanics from 3 Squadron AFC on the Western Front

And of course, no plane was safe flying about over the Lines. Both sides had hunting packs of swift “scouts” or fighter planes, whose job it was to knock the other side’s aircraft out of the sky. Books written by pilots after the war (such as Winged Victory by V.M. Yeates or Sagittarius Rising by Cecil Lewis) try to capture the madness that was the aerial dogfight.

A pilot, in the second between his own engagements, might see a Hun diving vertically, an SE5 on his tail, on the tail of the SE5 another Hun, and above him again another British scout. These four, plunging headlong at two hundred miles an hour, guns crackling, tracers streaming, suddenly break up. The lowest Hun plunges flaming to his death, if death has not taken him already. His victor seems to stagger, suddenly pulls out in a great leap, as a trout leaps at the end of a line, and then, turning over on his belly, swoops and spins in a dizzy falling spiral with the earth to end it. The third German zooms veering, and the last of that meteoric quartet follows bursting … But such a glimpse, last perhaps ten seconds, is broken by the sharp rattle of another attack.

Casualty rates, in training and in combat, were high.

This is Lieutenant Leslie Sell, from Albert Park, Melbourne, beside an RE8. A 25 year old photographer prior to enlisting on 23 October 1916 as Private Sell,  but quickly became an Air Mechanic 2nd Class. He left  Melbourne with 4 Squadron on 17 January 1917 aboard RMS Omrah. After arriving in England, he undertook pilot training and on 20 December 1917 he was commissioned as a Flying Officer (Second Lieutenant). In early 1918 he joined 3 Squadron AFC in France.

Lt Sell was shot down on 25 March 1918 and died later that day of his wounds. He is buried in the Hazebrouck Communal Cemetery, France. (Source: ADF Gallery and Australian War Memorial)