I’m working on a book of stories about two female bushrangers, set in the time of the Gold Rush. The Adventures of the Bushranger Captain Lightning And That Other Girl are young adult short stories paying tribute to the nineteenth century traditions of the amateur detective serial. So the stories are historical fiction, and also crime/detective stories (at least, some are – others are pure adventures).

It’s been my great privilege to spend the last few weeks writing in Falls Creek, high in the mountains of Victoria, as part of the Artist in Residence program.

So here’s what I’ve been up to, and how I spend my days.

When I’m in an intense writing phase, I often let myself wake up slowly and lie there for a bit thinking about the work. Quite often, this leads to urgently jumping out of bed to scribble down new dialogue or some critical plot point.  Some writers and artists, I know, do that every morning. But I don’t get into that state when I’m at home, going to the office a few days a week, thinking about other things. Here, I have the luxury of day after day of thinking about nothing but the writing, and in those minutes between waking and sleeping can lie moments of creativity or clarity.

I walk most mornings. Some days, it’s just a relatively short walk on one of the hiking or mountain bike trails around the village. On other days I do a slightly longer hike – still not too long, as I don’t like to be away from my desk for hours. But maybe 4 to 6 kilometres, with camera and notepad, stopping all the time to take photos or scribble or both. There are amazing walks up here in the High Country, and they teach me a great deal – and help me create a sense of place in the stories. 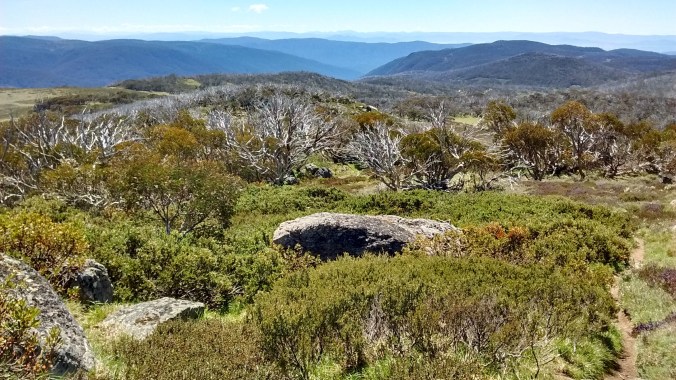 On even the short morning walks, I let my mind wander over the story I’m writing. I take my notepad or my phone, and I often solve important issues with the story or just make a bit more progress if I let my writing brain float while I walk. Again, I stop and scribble before I forget.

I’m also doing research as I go, on the ground here, and at the desk. The stories are set in 1856-7, beginning on the Mount Alexander diggings and moving across Victoria to end up here, in the Ovens and Buckland valleys and in the mountains of north-east Victoria. So I’ve been visiting as many sites of the gold rush as I can, including remnant diggings, cemeteries, old cattle tracks, and the rivers that were once rich sources of gold.

I’ve been to wonderful local museums in Bright, Beechworth, Yackandandah and especially here in Falls Creek, where I was also invited to spend a few hours scribbling notes from some great local history books. I learn so much from all these small museums. Sometimes you just need to see an artefact – a revolver or a miner’s cradle or a saddle – to know how to use it in a story.

The walks are also research. I’ve written scenes set on the trails and high plains,  imagining my characters seeing the snowgums and wildflowers, the high peaks in the distance and the patches of snow that I can see now. I went for a half-day horse ride in the Kiewa Valley, because it’s so long since I’ve ridden I needed to feel and hear it again, and that too gave me a much better sense of the distances my bushrangers could travel on horseback. 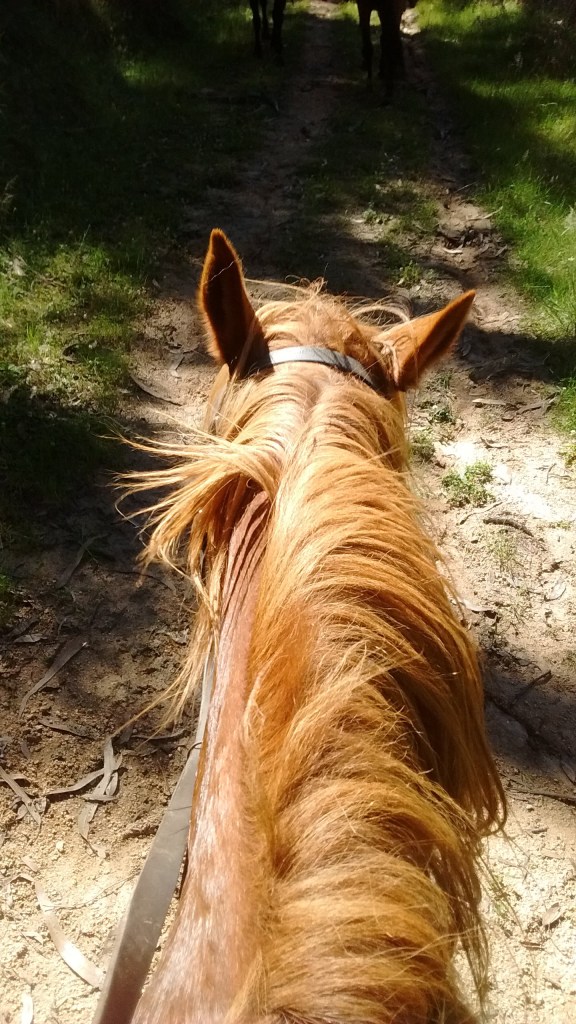 Because the stories are in serial form, each has its own plot or mystery, and they also have an overarching narrative.  That’s much more complicated than writing the one novel, even with sub-plots. There are key characters throughout, others who appear in a few stories but not all, and some who turn up only to be part of a particular mystery or adventure. Some of the events in the stories really happened, but most of it is fictional, so I have to track imagined characters, real people, and historical events. I use a very simple Excel spreadsheet for that – how old people are, when real things happened, what month we’re in, etc, for each story.  None of that is as hard to track as a biofictional work like Goddess, which had the mother of all spreadsheets, but I just like to see it at a glance.

The bushrangers and their families and friends are entirely fictional, but a few real people have cameos, like Lola Montez, Redmond Barry, Bogong Jack, and Robert O’Hara Burke. I have quick outlines of my main characters on sticky cards stuck up on the wall, in case I forget what colour someone’s hair is. These also help me think about the relationships between the characters in any given story. Staring at them just helps, I find. I don’t know how that works, but it does. 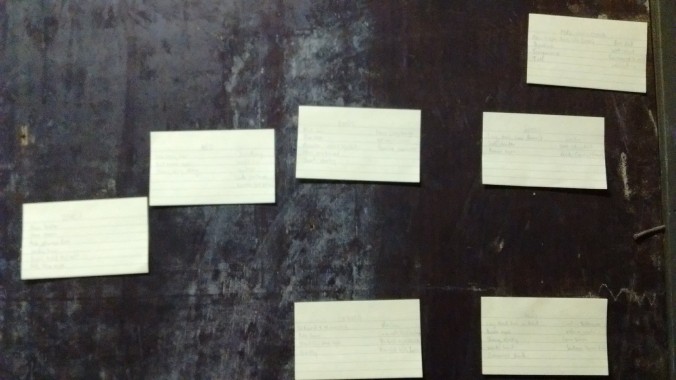 Another thing that works for some mysterious reason, if I get stuck or confused, is taking my blue notepad and sitting in a different place, then making diagrams of plots points or people, or just scribbling random words. It’s different to my project notebook, which has actual dialogue, research notes, and plotting in it.

And it’s blue! That’s probably why it helps.

As you know, if you’ve been through previous projects with me, I use maps a lot. Sometimes this is quite vague and simply helps me get my bearings in an ancient city. Here, it’s quite precise. I use old maps of the diggings, with site names long forgotten, and map after map of the High Country and valleys, to figure out exactly where and how my characters get from place to place.  Again, I have several stuck on the wall and I spend a lot of time poring over them, calculating how long a chase on horseback might take, which rivers need to be crossed, and which tracks existed at what point in history. 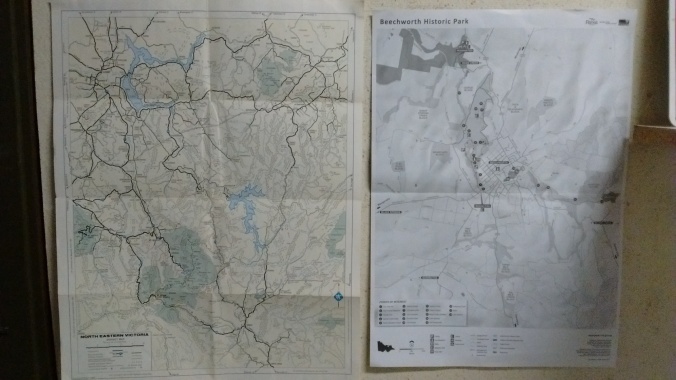 I brought books on bushrangers and the Gold Rush with me, as well as several literary texts about either early colonial mystery stories or detective writing generally.  I  also brought an enormous compendium of Sherlock Holmes stories, so every meal-time I re-read one of them, to keep my mind fixed on the detecting process and the serial form.

And I write in Scrivener, software made especially for writers, which helps me keep track of characters and timing and sites – I set these fields up in the metadata section – and most satisfyingly, at least on good days, tells me how many words I’ve written that day and overall.

I try to write about 2000 words a day. I get a bit stressed if I don’t hit the target, but I’ve made lots of progress while I’m here and should hit 60,000 words in the next day or so (I haven’t written all of those up here – I arrived with two stories already done).  That’s more than I expected to get done.

I’m also editing as I go, at least for the first rough pass, because they’re stories rather than one long novel. They’ll get a lot more attention when they’re assembled as a complete first draft, and then I’ll start the full revision processes.

But that, as Kipling says, is another story.