The Firewatcher Chronicles are set during the Blitz in London, and in a very specific area by the banks of the Thames: Puddle Dock and the City, up to St Paul’s Cathedral. 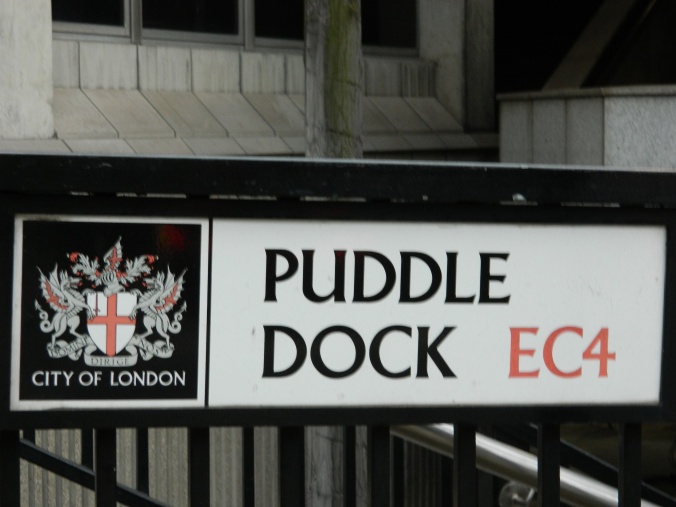 When I was first researching the books, I wanted to set them in a specific place that was affected by the many fires covered by the series. So it had to be somewhere inside the old Roman city but close to the riverbank. I wanted somewhere that’s not famous, just a place where the hero, young Christopher Larkham, and his family – normal working-class people – worked and lived and watched for fires during the Blitz. It had to be somewhere close to the river, so the kids can go searching the riverbank at low tide, and surrounded by those wonderful narrow, winding streets of the old city – streets with fabulous names like Addle Hill and Bleeding Heart Lane. This is how the area was laid out around the seventeenth century:

I chose Puddle Dock because there are few traces now of the place it once was, and also I loved the name. This is how it looked in the 1940s, with the tide out and the dock itself filled with debris from bombed buildings:

Here’s what that area looks like now, from across the river.

I admit it’s not all that glamorous (besides that glorious cathedral, glowing in the evening light). Puddle Dock now houses a theatre, apartments and offices, and is tucked in between two busy roads.  There’s no dock any more. Great swathes of the City are like that, not just because it is still one of the great financial centres of the world and therefore filled with office blocks, but also because so much of the area was flattened in the Blitz.

Brimstone, the first book in the Chronicles, takes place on  the night of 29 December 1940, when wave after wave of German air force bombers dropped 100,000 incendiary bombs, followed by more than 20,000 high explosive bombs and parachute mines, starting a series of fires that devastated the City.

Hundreds of years before the Blitz, on the night of 2 September 1666, the original Great Fire of London started in Pudding Lane.

This is how the city looked before the Great Fire (that big cathedral on the hill is old St Paul’s, where key scenes happen in Brimstone):

How terrifying that must have been!

And here, hundreds of years later, is how the same area looked during that one night of the Blitz: 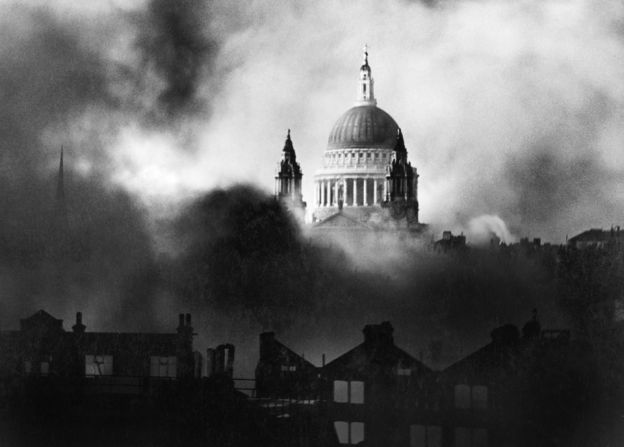 This is Herbert Mason’s famous photo, ‘St Paul’s Survives’, one of the most iconic images from the Blitz, and taken on the night of 30 December 1940 – the night on which Brimstone is partly set. This photo meant so much to Londoners, and people across the world who were watching with horror as the Nazi attacked Britain and many other places. London had just copped a beating, but the cathedral was still standing – surrounded by smoke and flames.

So you can see what poor Christopher has to deal with in Brimstone, time-travelling between not just one but both of these enormous conflagrations.

And, perhaps, why I couldn’t resist writing a story about a kid who fights both of the great fires of London in one night.

3 thoughts on “Brimstone and the Blitz”